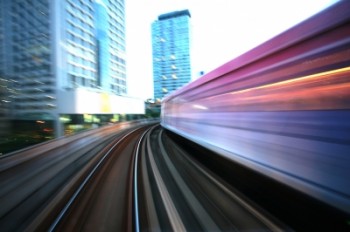 HS2 is short for High Speed 2 – the UK’s proposed high-speed rail-network, initially connecting London with Birmingham, and sending 14 trains per hour along the route; decreasing journey times from 1 hour 24 minutes down to 45 minutes (saving just under 40mins of the average journey time).

Sounds great, right? Well yes, there is of course the substantial time saving benefit of HS2 for those who live in either London or Birmingham and have a reason to regularly travel between the two locations. What type of person would this be? Most probably an office worker with a need to travel to and from client/customer meetings and meet with colleagues at dispersed office locations.

So in 2012, the first phase of HS2 was approved by the British government and its route is set to begin being carved into the British countryside from 2017, looking to be completed by around 2026. Oh, and did I tell you it will cost just £32.7billion to build. That’s right, £32.7billion.

And then we stopped thinking, and we began questioning. Why are we not seeing considerable investment by the government in modern day communication technology that is proven to be a viable option to replace travel? Why are we not encouraging solutions we know already work? Why have video conferencing suites not been rolled out in every organisation where business travel between Birmingham and London is common?

Actually, with a whopping spend of £32.7 billion, we calculated that we could provide a professional, secure & supported HD Video Conferencing system to EVERY SINGLE ONE of the 5.2 million businesses across the UK, allowing instant meetings with colleagues and clients not just located in London/Birmingham but with every business across the UK and even globally. Yes, that is every single business in the UK equipped with HD video conferencing in the meeting room, for the same cost of a single rail route.

Now just imagine the impact on the British Countryside (and families & businesses) if we were smart enough to do that.

And maybe, just maybe, we could go a good way towards meeting our carbon emissions targets too.