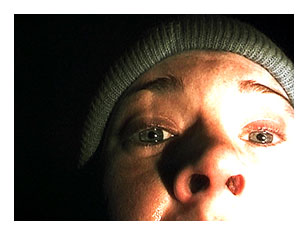 The critically acclaimed Blair Witch Project is one of the world’s most successful independent films of all time. The 1994 horror film received near-universal praise from critics, and is recognised as the first film to be successfully marketed primarily by the internet. Aside from being known for its improvised dialogue and newsreel style interviews, the Blair Witch Project made extensive use of a key cinematographic technique, sometimes known as “Free Cam”, to give an unprepared, unrehearsed feeling of reality – where stable imaging techniques are purposely removed and the viewers are left feeling immersed, uneasy and nervous. This technique, we regularly stumble over in the horror genre is also more widely know as “Shakey Cam”, or “Queasi Cam”. And it’s not just a rumour. Shakey Cam has been widely attributed to causing dizziness & distraction, with many viewers of the Blair Witch Project even filing complaints and reporting physical nausea, purely due to the film techniques in place. Good work directors.

Now, you might be wondering what I am doing talking about Horror Films and vomit on a business blog.  However, i’ll hopefully help to clarify my reasoning by relating to a meeting I was involved in last week.

“Hi Emily, Paul here, my trains been delayed. I’m still sat at Paddington. I know it’s last minute but is there any chance we could postpone the meeting for an hour or so?”

“Well we’re all in the boardroom now so just call into our system from your iPad, if you’re somewhere suitable?”

“Sure thing, be with you in a minute”

Wonderful. Video technology saving the day. 2 minutes pass and the call comes in from a LifeSize UVC ClearSea client. Perfect.

“Hi guys, sorry for the delay, hopefully you can see me?”

No problem. Everything looked well and we began the meeting.

…And then our mobile attendee stepped off the bottom of the escalator and began to walk to the cafe.

Now as an avid believer and user of Professional Video Conferencing systems, I am fairly used to high quality video in a corporate setting, rooms that are often designed for the purpose, or at least have the meeting attendees sat down, still, in chairs, focused upon the meeting in hand. I have regularly held wonderfully high quality meetings with others using tablets and smartphones running ClearSea or Jabber or RealPresence Mobile. However, not often has my far end been hastily walking, through a busy train station, carrying a briefcase in his spare hand and feeling flustered that he’s running rather late for a rather important decision making board meeting.

At this moment, I felt like our boardroom was experiencing a real-time Blair Witch Sequel, with a good view of our participants nose hairs encapsulated by heavy breathing and an unusual strobe effect caused by the inability of the iPhone camera to adjust to the halogen lights passing above. Not really what you want from a meeting, especially when watching on a 70″ screen (Every hair, every blemish, magnified to unflattering proportions against a migraine inducing backdrop – not at all what I signed up for when accepting the meeting invite).

So what can you do if you are faced with a similar situation? Here are three of VideoCentric’s tips for preventing sickness within the boardroom.

In my honest opinion, mobile video conferencing is best used in these situations, where you are perhaps not as “mobile” as the name makes out – a cafe, at home, sitting in a car park, travelling on a train (Einstein’s theory of relativity of motion can be saved for another time) – and where your camera can be fixed. You can even get some nifty device stands if you’ve got somewhere suitable to put it. I’m sure your boardroom will thank you for that too.

So rule number one: Please try to stay still. No Queasi Cam required.

Self View. It’s not a mirror.

I’m not sure whether all video conferencing users would agree, however I generally feel it necessary to activate a “Self View” (showing yourself what you appear like for the far end) when in my most important calls. Much of the time, the far end won’t tell you if you look like a 18th century portrait by Auguste Edouart, or are blinding them with an over exposed video feed (of which horror, and many other film genres use as a cinematic punctuation to attune viewers to a shock-and-awe aesthetic or create apparitions and “feelings of the unknown” – see 1996’s Independence Day and 1978’s Invasion of the Body Snatchers for some examples). No, they’ll just get on regardless. However I bet your input in the meeting will only be remembered as the person who the boardroom was glad to get rid of as soon as possible. Not how you want your board of directors thinking about you, is it?

Plus, quite handy to notice those unsightly double chins early on and move the camera accordingly to save yourself the embarrassment when re-watching the recording at a later date.

Just try not to get into the habit of using it as a live mirror. People will cotton onto this rather quickly and no-one wants to be known as that guy.

Rule number two: Get the self view on. Check yourself out. Make sure you can be seen.

A well designed video enabled room or telepresence suite uses certain colours, backdrops, lighting and camera positions to enhance the quality of a conference & to ensure that every meeting is the most productive it can be. Even a non video-enabled meeting room doesn’t have magic eye posters & James Bond films playing on the digital signage. Why? It would be ridiculously distracting.

As you can imagine, the most optimum designs have taken years to develop, and even now, many room just haven’t got it right.

Now cue mobile video conferencing. A relatively new technology which, of course, is mobile. You’re not going to be carrying around perfectly designed pull up banners & lighting rigs everywhere you go. So if you are planning on joining a meeting via mobile or tablet, give yourself a few minutes to find yourself a suitable spot to perch. Preferably not backed by an African Wildebeest migration or at the entrance to Nemesis Inferno. And if you get caught in a call out of the blue, perhaps it’s best to keep your video muted just until you’ve found somewhere “pleasant”.

No, this doesn’t really address the cinematic technique part. But I think it will do a good deal towards preventing the boardroom nausea. And that’s definitely a good thing.

Remember you are part of a real meeting! There is plenty of “video conferencing etiquette” that has been banded around over the years, and most of this can apply to mobile video users as well as rules for in the meeting room.

Make friends with features such as mute audio, mute video & self view.

Give yourself some time to get prepared.

And please, stop chewing that gum.

5 responses to “Making the Boardroom Seasick? Sounds like a Horror Story…”