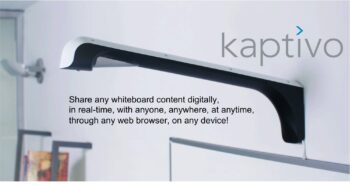 “This notion of virtual whiteboards and advanced collaboration became more important, particularly as people are working from home,” Lifesize CEO Craig Malloy said of the company’s decision to buy Kaptivo.

Malloy first came across Kaptivo a few years ago through an online ad, and was fascinated by the idea of digitizing a regular whiteboard. He ended up buying one and installing it in Lifesize’s office, telling the company’s engineers that they should integrate it with Lifesize’s product.

There’s been an increase in demand for Kaptivo’s products since the COVID-19 pandemic sent students and employees home to learn and work, according to Hsieh. As people started to work from home, they realized what tools they needed to be productive. And as anyone who’s been in a conference room for a brainstorming session will know, coming up with new ideas often involves grabbing a marker and drawing on a whiteboard.

“When you’re working from home (collaborating to brainstorm) becomes much more difficult,” Hsieh said. “So we’ve seen an increasing demand as people see their productivity disrupted because of a lack of tools.”

Joining Lifesize was a “natural fit,” Hsieh said, as Kaptivo works better as part of a broader solution. The first step together is rolling out a new digital whiteboard product, co-built by the companies, that will be integrated into Lifesize.

Lifesize, which declined to disclose the purchase price of Kaptivo, plans on acquiring more companies to build out a suite of unified communications, Malloy said.

This article has been reposted from Crunchbase News. See the source article here.