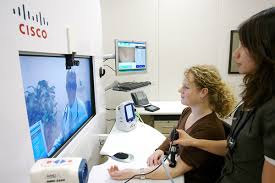 Video Conferencing systems have been installed into two separate operating theatres in James Cook University Hospital, Middlesbrough, to bring ground breaking high definition operations to over 70 surgeons from across the world.

Using Cisco (Tandberg) C-series codec technology, VideoCentric Ltd installed systems in two separate operating theatres and dual 1080P cameras to each, one camera to capture a view of the surgeons performing the operations and the other camera – an illuminated 1080P laparoscopic camera – for internal views. Both theatres were then transmitted live over the hospital IP network to a delegation of over 70 surgeons, each from separate UK hospitals, sitting elsewhere in a large seminar hall.

The event was part of a master class in keyhole surgery whereby professors from around the world who had pioneered new techniques, were able to share their experiences with other surgeons who could ask questions, challenge the techniques and make comments live, as the surgery to remove tumours from kidney and prostate organs, continued.

In a comment made to ITV Tyne Tees Television, Jane Cresswell, Consultant Urologist at the Middlesbrough Hospital said, “The immediate benefits to the patients that are being operated on are that they can have their operation performed by Professor Gill from Southern California who is really a pioneer of these new techniques“. Professor Inderbir Gill went on to explain that his techniques were different because traditionally bloodflow would have been stopped during the procedure whereas here it was allowed to continue meaning that complications would be fewer and recover times considerably quicker.

David Shimell from VideoCentric added, “Without the multipoint 1080P full high definition technology in place for the two days, the interactive event would simply not have been possible. We needed to explain to delegates that regular video conferencing systems were being used because the quality was so astonishingly high, assumptions were being made that live cable feeds were transmitting the images from each camera to the lecture theatre, whereas in practice this can be transmitted & received live to any location in the world, right now”.

VideoCentric Ltd have supplied and installed highly secure video conferencing and networking infrastructure to hospitals and healthcare establishments nationwide, and their specialised healthcare solutions and technology allows remote consultations, professional training and healthcare administration to take place securely, in real-time and on demand.